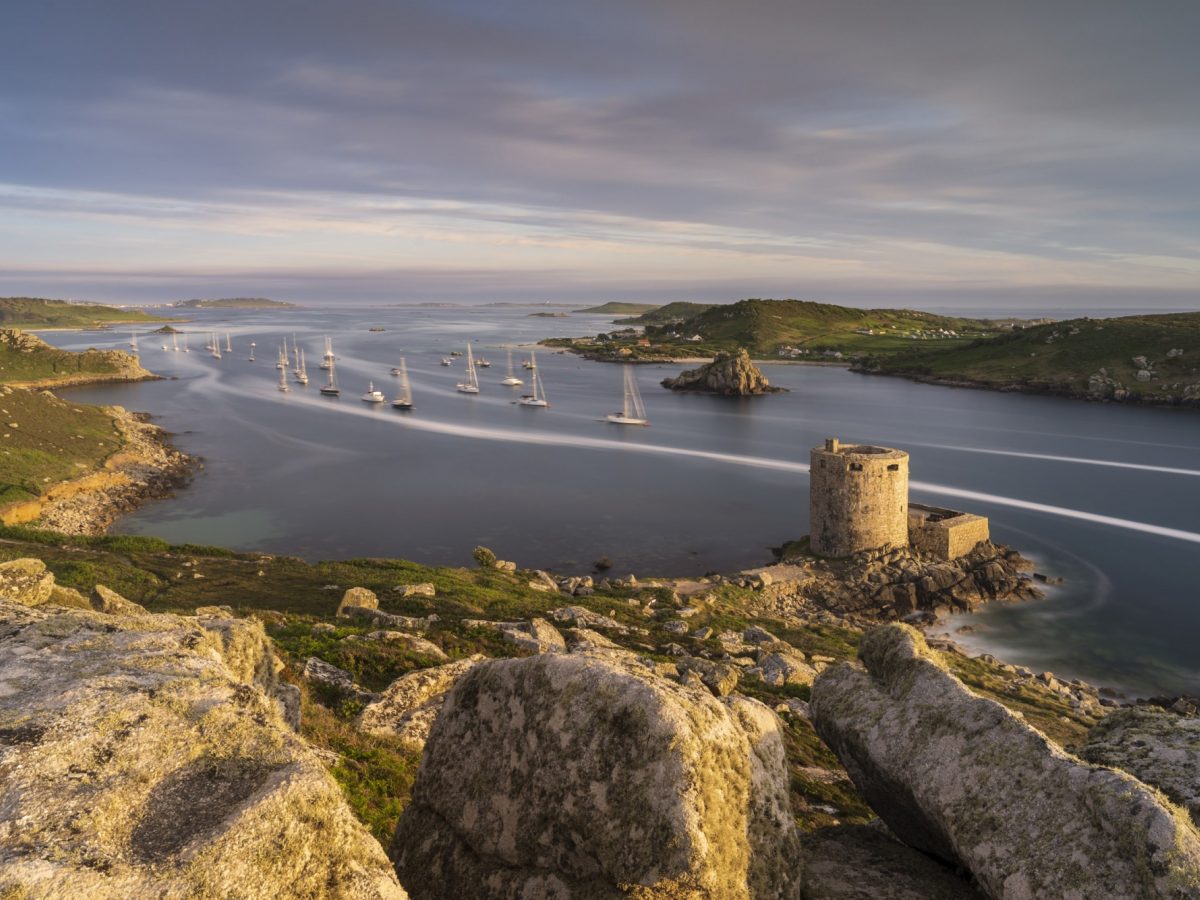 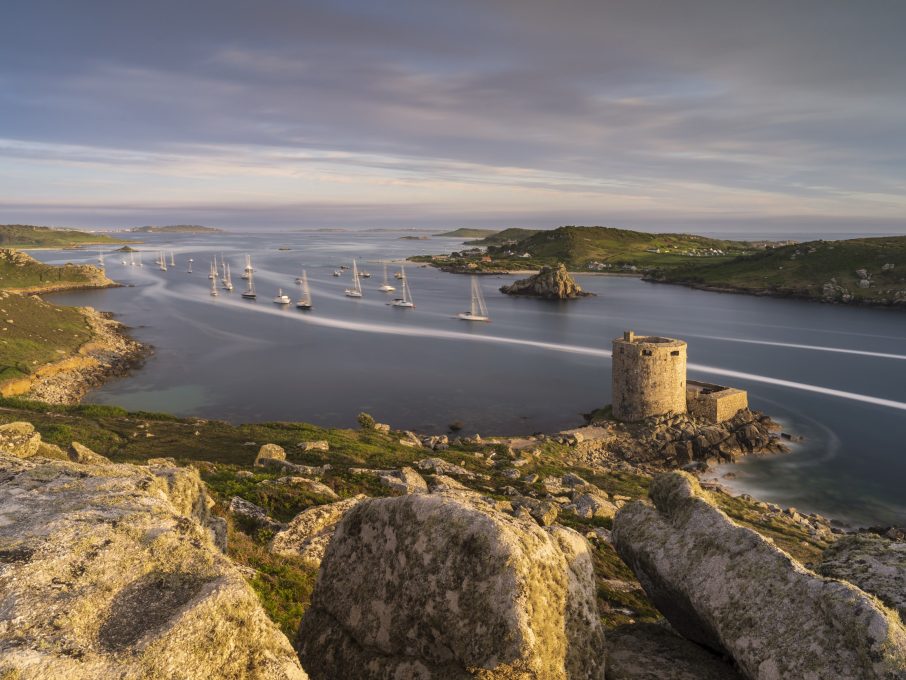 Tresco is famed for its natural beauty, mild climate and exotic gardens, but this idyllic island has also been in the front line of Britain’s defences since the 16th century.

Due to the threat from the Spanish and the French, two Tudor forts – the Old Blockhouse and King Charles’ Castle – were built to defend the harbours at Old Grimsby and New Grimsby, where enemies might try to land their troops. In the mid-17th century, Tresco had a prominent role in the Civil War and Cromwell’s Castle was built in the early 1650s to strengthen the defences of New Grimsby harbour. From the 18th century onwards government military expenditure in Scilly was devoted to the major fortifications on St Mary’s, but during World War I a seaplane base was established at New Grimsby on the site now occupied by the Flying Boat cottages and restaurant.

Henry VIII built a series of fortifications along the English coast to defend against his French and Spanish enemies, but Scilly was left unprotected. However, between 1548 and 1550 – during the reign of his youthful successor Edward VI – the Old Blockhouse and King Charles’ Castle were constructed. The Old Blockhouse, which overlooks Old Grimsby harbour, was probably the earliest of the defences on Tresco. It consists of a square, paved platform that could have accommodated three guns. On the south side there are remains of a built-in locker, presumably for gunpowder, and attached to the west side is a small room with two windows and a fireplace which would have offered shelter for the garrison stationed on this exposed site. Around the building there is a shallow bank that could date from the mid-16th century or from the Civil War when the Old Blockhouse was at the heart of the fighting on Scilly.

King Charles’ Castle was built on the west side of Tresco between about 1548 and 1550. It consists of a polygonal gun room with five gun embrasures, though one was abandoned later when a small room was created in the north-east corner. Attached to the east side of it there was a large room, the northern half of which was used as a kitchen for the soldiers manning the castle. At the north and south ends of this room are small, square bedchambers with no fireplaces, but the northern room has a triangular, stone floor in one corner, perhaps for a small brazier. A large porch or guardroom protects the entrance to the building. There is some architectural stonework lying around the outside of the building, though whether there is sufficient to recreate the missing upper storey is uncertain. Around King Charles’ Castle there is a large earthwork, which may date from the 1620s. It is roughly square in plan with a bastion at its north-west corner and a demi-bastion at its north-east corner. A couple of hundred metres to the south-east there is another 400m long earthwork across the plateau. This is very slight, no higher than about 0.3m, and is probably a laying-out preparation rather than a fully-fledged defensive structure, and may well have been constructed at the same time as the castle.

The Civil War and Oliver's Battery

In 1646, the Royalist forces in Scilly initially surrendered to Parliamentary troops but in September 1648 the garrison rebelled against the Governor and declared for the King. Scilly then became a major privateering base preying on British and Dutch vessels. Parliament’s attempts to counter this proved largely ineffective, but in March 1651 a squadron of Dutch ships under Maarten Tromp was sent to obtain the release of captured Dutch ships. Parliament feared that the Dutch might also try to capture the islands, and so an expedition commanded by Robert Blake was sent to retake them from the Royalist garrison and ensure Scilly was firmly back under Parliament's control. Blake’s troops eventually landed on Tresco near the Old Blockhouse after some heavy fighting. They then marched across the island to take King Charles’ Castle. With the island in Parliament’s hands, a gun battery, Oliver’s Battery, was built at Carn Near, overlooking where boats today land visitors to Tresco at low tide. Set in front of the large, rocky outcrop, this earthwork battery had positions for two guns that were able to shell ships in St Mary’s Pool and the Road, forcing the Royalists to surrender in June 1651. You can learn more about Tresco's rich military history here.

Documents suggest there may have been a small fortification at sea level protecting New Grimsby Harbour in the 16th century. Inside Cromwell’s Castle there is a datestone on the inside face of the door onto the gun platform that has the incised legend ‘M1591H’. However, this seems to be a reset stone as its inconspicuous location is at odds with its commemorative contents. After Tresco was retaken by the forces of Parliament in 1651, a ‘new blockhouse’, Cromwell’s Castle, was built and in 1715 the engineer Christian Lilly described it as: “Standing at the Foot of a Steep hill much higher than its Top, and is a Huge Mass of Masonry, consisting of a Round Tower two Storys high, with a Platform for six Gunns upon it, and a Battery before it for Six more at the Watters Edge". Cromwell’s Castle is a tall cylindrical building with a lower gun platform attached to its west side. Inside there was a large heated room beneath the vault and in the jambs of the windows there is a wealth of graffiti including some initials that may have been left by soldiers manning the castle in the 18th century. On top there are gun positions all around allowing artillery to fire at enemy ships trying to enter the harbour.

During World War I, Scilly remained of strategic significance, but for an entirely new form of warfare. Submarines were a threat to allied shipping and aircraft were used to hunt submarines as the wake of a periscope could be seen from the air from several miles away.

In January 1917, a flying boat and seaplane base was created at Porthmellon on St Mary’s, despite warnings that the bay was too exposed. These proved to be well-founded and before it became operational the base was transferred to New Grimsby on Tresco.

The first patrol was flown on 28 February 1917, and on 18 May 1917, a flying boat from Scilly flew its first escort over a convoy, coming from the Mediterranean. In the last two years of the war aircraft from Scilly made thirteen U-boat sightings and attacked on nine occasions. In one case, a U-boat was thought to have been sunk, although it later emerged that it may have survived the attack.

The base at New Grimsby covered the southern part of the bay and consisted of a slipway, hangars, offices, ratings’ and officers’ quarters, a canteen and a sickbay. Little survives today, but The Bothy, a former potato store used for bomb storage, is extant despite being damaged in an explosion. The Power House, another former agricultural building converted for the use of the airbase, also survives. The iron rails on the slipway indicate where the flying boats and seaplanes were launched and recovered on trolleys, and a number of concrete standings for other buildings can still be seen at the south end of New Grimbsy.